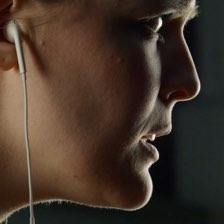 In 2015, I commissioned three pieces. I wanted to perform with my whole self — my voice, my body, as well as my flute. Each piece was to incorporate these additional forms of expression.

Together with Wayne Reich and Ben Singer, I made plans to record and film each work in an environment that could complement and inform that particular work. 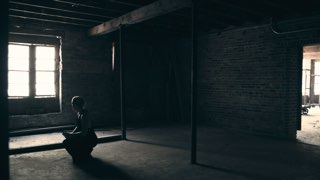 I asked each composer to imagine a place for their music, in effect, extending the composition to include its documentation. Each piece in Moving Sound was recorded live in the environment you see.

What was not clear was how we should distribute this kind of work. Digital distribution has a wide and instant reach, but it is also fleeting. We didn't want to put out a video to have it disappear the next week.

We wanted something like the CD booklet or the LP jacket — something to hold while you find out more about the people, the process, and why this music matters. And so, ambitiously, we decided to make an app — Moving Sound. 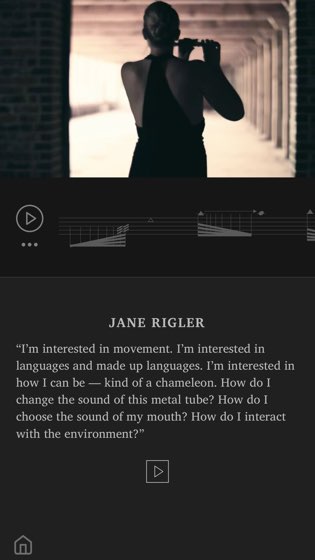 One of the first ideas we had was to include the score, a part of the process the audience almost never gets to see. In Moving Sound, the score moves with the music; it is the way to navigate and understand the piece.

Moving Sound also includes short panels with background material, interviews with the composers, and the text used in the pieces. In the bonus area, the app has audio and video files that download directly to the device.

Our hope is to reach people in a way that encourages exploration not just of these pieces, but other New Music.

It is nearly impossible to communicate the internal world of desire with words. In his composition, Mark Engebretson takes Brian Lampkin's poem Desire and conveys it with three different voices.

The most obvious and expected voice heard in Desire is the sound of flute. In the course of the piece, complex and frantic phrases slowly transform into passionate melodies.

Without warning, the sound of the performer’s singing voice enters, providing a different dimension and understanding of the “flutist”. Finally, the most intimate voice of the three enters the work — a voice speaking the text.

Together Alone is a reflection on social media’s cultural impact. Movement 1, News Feed, divides time precisely into one-second ticks, using percussive sounds and an incessant, high, pulsing pitch that eventually bends and distorts. David wrote the eye movements into the score, jumping with higher and lower pitches, and mirroring the distracting nature of our ever-updating News Feeds.

Though our world is more connected than ever, these internet relations can often feel hollow without in-person connection, leaving one to feel isolated and alone.

Dreaming in its Shadow

Jane Rigler is fascinated by the musical connections shared by family. In the Boysen family, Franz Schubert’s Der Lindenbaum (always called The Linden Tree Song) has been sung at family gatherings for generations.

It carries great meaning, honoring those who have emigrated to new lands and the accompanying nostalgic yearning for “home”. Jane took her own flute recording of Schubert's melody and the sound of crisp, dry leaves to create a backing track that underpins Dreaming in its Shadows.

In the app, the backing track and the live flute recording can be heard independently, as a further way to exlore the composition.